How to Become a Professional Ski Instructor During Your Gap Year 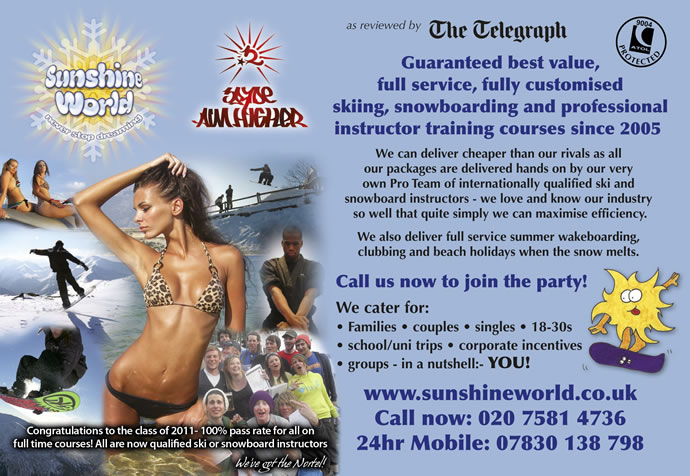 I have now been a qualified snowboard instructor for more than 17 years and also a ski instructor and tennis coach for more than 16 years. I first qualified in January 2001 when I was 15 years old in Whistler, Canada with what was then one of just a handful of professional instructor training companies. Today there are dozens of companies and far more websites which sell other people’s courses making a minefield of good or tragic possibilities on your path to becoming an instructor. Some courses offer good service and results but at extortionate prices with huge profit margins. Other courses are run by cowboys who can easily sell the dream with the usual sound bytes and “imagine a life being paid to ski or board” dream-pushing only for you to find that your £6,000- £8,000 ten week course would have been far better elsewhere.

The end of the 2017- 2018 season marks the evolution of one of my biggest goals, dreams and ambitions at Sunshine World as we have now had more than 70 people qualify as professional ski and/ or snowboard instructors through our training alone, all trained by our very own 3Ryde Pro Team including myself, and we still hold a 100% pass rate for everyone who trained on our 10 week or longer courses with full attendance. The Sunshine World instructor training courses remain by far the cheapest in the world. We own our own luxury chalet, have our own Internationally licensed Tour Operator through which we organise professionally run, all inclusive ski and snowboard holidays to the awesome resort of Zakopane, Poland’s winter capital as well as great French and Slovakian resorts among many other tours in summer and winter: www.sunshineworld.co.uk . As we have a permanent base in Poland all the running costs of the business and our living costs couldn’t be cheaper and so our £ goes that much further all around. The ski areas now have mainly brand new lifts and the resorts even have features which you don’t get elsewhere such as floodlit skiing and boarding until 10pm every day of the season. The male to female ratio is also more balanced than any resort I’ve ever been to.

The ski and snowboard industry is actually rather small, especially the part of the industry which is independent from the huge travel corporations who control the majority of all travel including winter travel. They have multiple brands which are all controlled centrally making them appear smaller and more personal and masking their profit driven, corporate approach to business. The ski and snowboard instruction part of the industry is even smaller and is highly protected in Europe by the cartels (in my opinion not far off gangsters on snow) who do everything they can to maintain their stranglehold on the lucrative market of selling lessons, even breaking National EU and International laws on qualification recognition (particularly in France).

In the UK there never has been an official Government body for ski and snowboard instructor qualifications. There used to be a highly reputable and democratic Member’s Association called BASI (the British Association of Snowsport Instructors) who I qualified myself with as a BASI 3 ski instructor shortly after my 19th birthday, 14 years ago. 12 years ago however the BASI Member’s Association was converted by the corrupt BASI “directors” along with just 300 or so votes out of thousands of BASI members (most of whom didn’t vote at all, in my opinion because they weren’t aware of the severity of the vote’s implications and/ or because they didn’t know a vote was taking place at all- members were made aware of the vote by post along with the recommendation of the board of directors to “vote yes” in favour of changing BASI’s legal status to a “Company Limited by Guarantee” or a LTD company to you and me). Thus today there is BASI LTD. They still sell the “Official BASI GAP Courses” to the “BASI Affiliate” companies. It doesn’t take much looking before you see the obvious links between the people who run BASI and the people who run the BASI Affiliate companies.

I started Sunshine World when I was 20 after 5 years of training through expensive courses while working full time to help pay for those courses. As there was no viable, affordable alternative system for either full service ski and snowboard holidays or professional instructor training I figured I’d make a new system myself. I had grown impatient with jumping through the hoops set out by people who may or may not have once been good and dynamic athletes when they were younger but now were clearly simply too old to be up to date with the latest styles in skiing and snowboarding. Many of whom couldn’t even hit a rail or nail a proper 360! They control the highest levels of qualification even though the most senior people in the organisations never had to take the tests which younger instructors have to in order to get the same official badge and status! (All the governing bodies of skiing and snowboarding around the world work a similar, although not identical way) They were automatically awarded the new top level status when they invented them. For example CASI (the Canadian Association of Snowboard Instructors) only had 3 levels when I qualified with them over 17 years ago. About 2 years after I first qualified with CASI they brought in the CASI level 4 and most of the senior level 3s automatically gained level 4 status including my own coach, Greg Daniels. Now Greg is a legend in every way I can think of and I love him dearly. The only reason I mention his example now is that I know many people who have tried for their level 4 who are clearly much better riders than Greg as well as being passionate, experienced and extremely talented instructors and yet they fail their level 4 time and again. The people running the associations claim to be trying to maintain standards whereas I think it’s clear that they know that the fewer people who have “their” level then the easier it is for them to maintain control of these lucrative and powerful organisations. If you don’t do things their way you wont get the top level as they control who passes and fails.

Albert Einstein was refused entry to University for not being at “the standard” set by the admissions board. Sometimes those who the old guard try to hold back are able to evolve further than ever through their own passion, intuition, freewill and refusal to quit.

There are many ways into and through the industry. At Sunshine World we help people gain qualifications more cheaply and with far more fun and positivity than any other company on the market. Every person who comes to Sunshine World has a name and a story which I care about genuinely and I train them myself along with our Pro Team of internationally qualified ski and snowboard instructors. We have trained many people now who have gained employment both through Sunshine World and with many other companies all around the world. Working in Canada, Japan, all around Europe, New Zealand and many other destinations in both summer and winter.

My personal mobile number is: 07937 017 038. This number is on all of our 60 websites and this level of openness and simple honesty is what you can expect from us every step of the way. We are different to ALL the other companies on the market in virtually every way. One thing is certain- we get great results, cost far less than every alternative, have an amazing time and we don’t let anyone stop us from helping people have awesome experiences on and off the slopes every year. Please do call or email us any time if you’d like to find out more. There’s no question that it’s worth getting into the industry. Most importantly believe in yourself, work hard, train hard, play harder and don’t let anyone knock your confidence or make you feel you aren’t at “their standard” and Never Stop Dreaming 😀 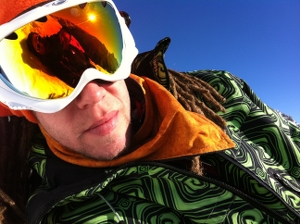 How to Become a Pro Ski and Snowboard Instructor

So there I was, in London on a recruitment day for Sunshine World. I was looking for a snowboard instructor position after having done a season in Canada (2008-2009) to gain my CASI snowboard qualifications. After a long search I came across Sunshine World online. It sounded interesting and I was willing to have a look into it. I decided to email Alan Garcia and after several emails I got invited to a recruitment day in London.

Traveling from Cumbria it was quite a mission to get there but it was a great day, meeting many new people and have a laugh. Whilst the day was informative, the philosophy of Sunshine World spoke to me- with the general message: LOVE and CARE, not just for people but also for situations by making a real difference because of the position you are in and what you can offer. Unfortunately I wasn’t able to be part of Sunshine World that season. This didn’t stop me from really wanting to be a part of Sunshine World. 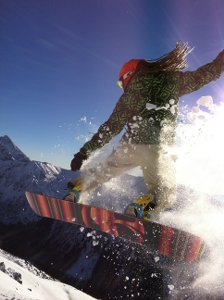 Me and Alan kept contact on and off for many months to come untill he gave me an opportunity of a lifetime. Alan made clear to me that he wanted me to be part of the team the following winter season (2010-2011) and came up with a proposal: Not only did Alan give me a position as a snowboard instructor he also planted a very important seed- to become dual qualified, something I didn’t give much thought before, a position on the Sunshine World Academy to Gain my Skiing qualification (CSIA) was the result, never had I been on skies before and with some reassurance that it was indeed possible to become qualified I decided to give it my very best and accepted the once in a lifetime opportunity. 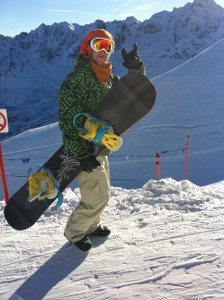 In Jan 2011 I flew into Krakow airport! I did it, I was there, ready to have an amazing winter season in Zakopane Poland! And so much MORE then amazing it was! The people, Zakopane, the Sunshine World Chalet, the Polish culture, The Snowboarding and the first time skiing, every single moment was awesome. Before I knew it one of the best times ever FLEW past, so many great memories but the time came that Alan himself and the Acadamy gang left on the most mental roadtrip to Andorra where all the exams were held at the end of the season. After breaking down on the first day, a sick night out in Bratislava, a 2 day stop in St Tropez, traveling through 6 different countries we finally arrived in Andorra where we stayed in a 4* Hotel! Time to shine! and guess what? After a lot of hard work, I DID IT!! I managed to get my CSIA level 1 with many thanks to Alan and the other ski instructors from the Pro team who have been setting me up and getting me ready for the exams during the season! I am dual qualified, so many places to explore, so many mountains to ride, but life will always be too short! For the coming winter season (2011-2012) I managed to get a position as a snowboard and ski counselor in Switzerland, a very good job with many opportunities for my future growth and personal development. I wouldn’t have been able to be in this position if it wasn’t for the opportunity given to me. Every mountain I ride in the future, every person I’ll be teaching, every fresh line I’ll be shredding … None of this would have been possible without Alan, what he stands for and for what he has achieved … Sunshine World … aim higher …